Skip to content
Video surveillance (CCTV)
Detection, alarming and documentation all in one

Video surveillance - what advantage do I have?

Video surveillance is an efficient and, above all, sensible form of protection. Most video surveillance systems today do not require additional motion detectors due to their motion-sensitive video sensor technology and can alert the user via smartphone apps via push notification. In addition, a video surveillance system is an excellent documentation tool. Not only for you as the owner, but also for your insurance company and the police, the video of a surveillance camera is an important piece of evidence.

For professional and above all redundant video surveillance, you need surveillance cameras and recording devices, so-called recorders, which can store the video material on hard disks. These are available from a wide variety of manufacturers and offer an enormous variety of functions. They differ in maximum hard disk capacity, control via mobile app, transmission options and various other functions.

There are also two major differences in recording technology. For example, there are the somewhat older analog surveillance cameras with their own power connection and direct connection to the recording devices. And then there are the modern and professional IP cameras, which can even be supplied with power directly via the network cable using PoE technology (Power over ethernet), or sometimes even function completely wirelessly with integrated batteries, WLAN and memory cards. Various camera features such as sensor size and camera lens determine the quality of the image. In addition, there are often fundamental differences in the structure of the surveillance camera. For example, there are permanently installed cameras in all possible forms, but also motorized pan cameras which allow 360° surveillance.

You can buy a surveillance camera that can record permanently and thus monitor heavily frequented rooms or areas. Here the recording time plays an important role. Alternatively, you can also purchase cameras that use an integrated motion sensor to detect movement in the room and only record if movement has been detected within the set period.

In the meantime, security technology is so advanced that it is possible to record and store surveillance videos for several weeks, provided your recorder has enough memory space. In addition, almost all digital surveillance cameras, even “Chinaware”, can now record at night using built-in infrared lighting.

Modern recording systems in video technology use various filters and technical solutions to obtain optimal recordings. So you can not only enjoy the video recordings in full HD resolution, but also zoom in without any problems if necessary and above all get still images in excellent quality. This can significantly simplify the identification of criminals in the event of burglary.

Again and again the question arises whether video surveillance is allowed or not. Does private video surveillance serve as evidence? The last time this question was clarified in court was when it came to the form of dashcams. This is a kind of road traffic documentation. Although the dashcam is highly controversial, it can also be used as evidence in justified cases. However, it is difficult to tell when a video recording is considered to be justifiably important and when it is not. What is allowed – what is forbidden?

In principle, you may install cameras at your own home or on company premises, because the following applies: As long as it is your private property, the use of surveillance technology is completely legitimate. In general, however, you are safer in the legal position with fixed cameras than with swivelling models, as an accidental swivelling to the neighbour can be ruled out. If the camera takes a picture of the neighbour’s property, or if he or she has the impression that your camera is filming his or her garden, then he or she can prohibit you from using this camera. Therefore the camera should be fixed and in the best case it should be positioned in a way that the neighbour cannot be filmed. This also applies to camera dummies, because this is the only way to avoid the danger of being shown by your neighbour.

Note the following checklist when mounting your camera:

Last but not least, the question remains what about the privacy of the people who consciously visit your property. The obligation to inform applies here. This is implemented in such a way that you affix a sign on the private property or on the company premises. This sign must state that you are filming the surroundings. Thus you have fulfilled your obligation to inform by informing the person and giving them the choice whether you enter the property or not. 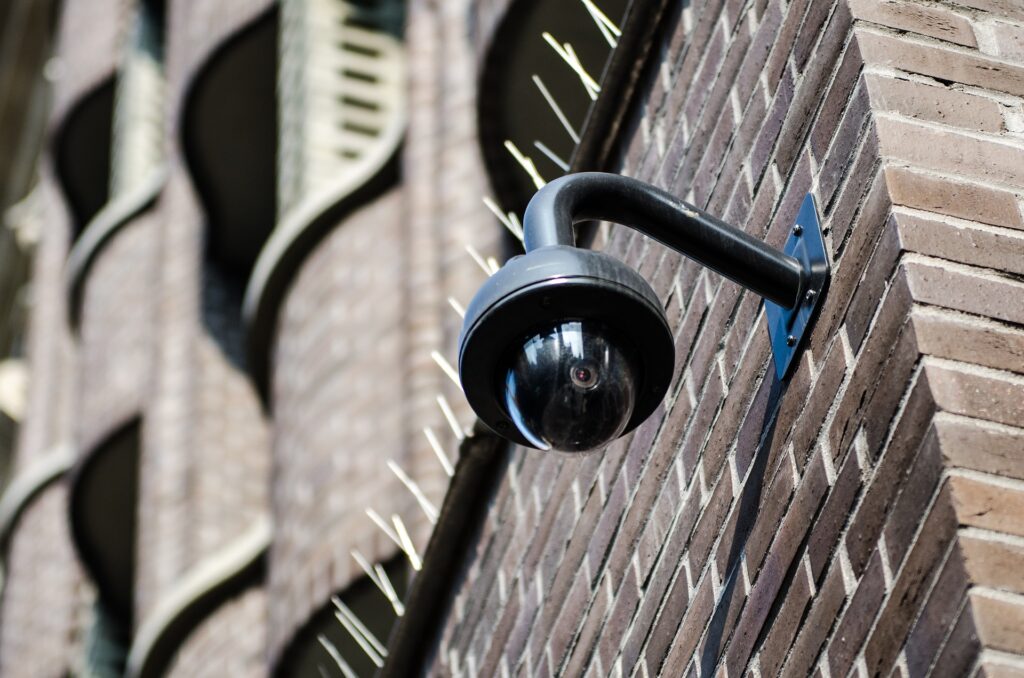